The bright orange shipping container cafe at Cardiff Barrage finally opened for business on 30 April 2018 and it had a busy first week, according to its manager, thanks in no small part to the brilliant weather over the bank holiday weekend.

Caffi Hafren Café (or our choice: Cafe Hafren) is a bit of a first for owners RSPB Cymru – it’s principally a way to generate money, some of which will go towards running Flat Holm, the management of which the charity is planning to take over from the island’s owner Cardiff Council.

(Flat Holm, which represents the most southerly point of Wales – good pub quiz trivia! – was once popular with pirates, smugglers and cholera victims, and these days is a Site of Special Scientific Interest and home to a significant breeding colony of lesser black-backed gulls. For information on how to visit Flat Holm, check out the Harbour Authority’s web page here.)

Anyway, back to the metal box, which is now offering Bay strollers and Barrage visitors a great spot to stop for a cuppa or a snack. Its garish orange means the nearby exotic pink hut isn’t the only building of unusual hue in these parts.

Orange struck us as a bit of an unlikely colour for twitcher types to choose – it has to be the world’s worst bird hide – but perhaps it’s so it can be seen from across Cardiff Bay in murky conditions. Maybe someone at the Council chose the colour. Anyway, it’s a lot nicer inside – besides, there’s cake in there (more on this below). 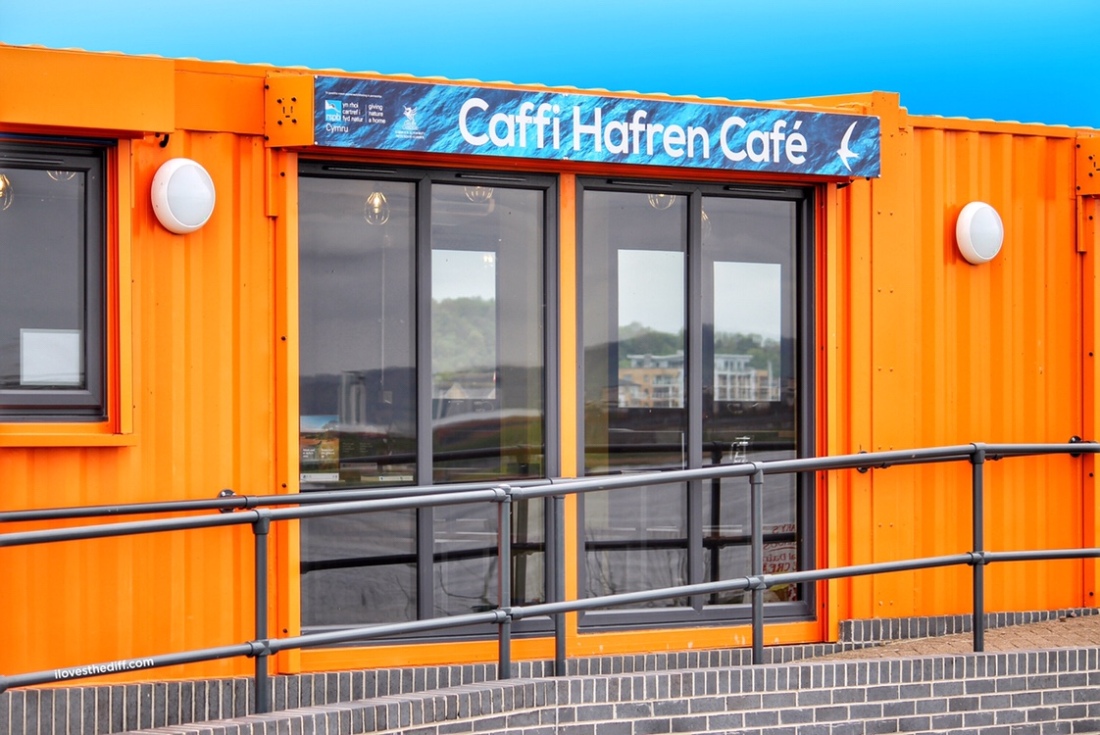 Cafe Hafren (Hafren is Severn in Welsh, by the way), may be a shipping container-style building but it boasts ramp access, automatic doors, and is nicely decked out. It also has a full kitchen (with menu to match) and, thanks to plenty of large windows, offers the same great views of Cardiff Bay and Penarth Marina that you can enjoy from, well, immediately outside. 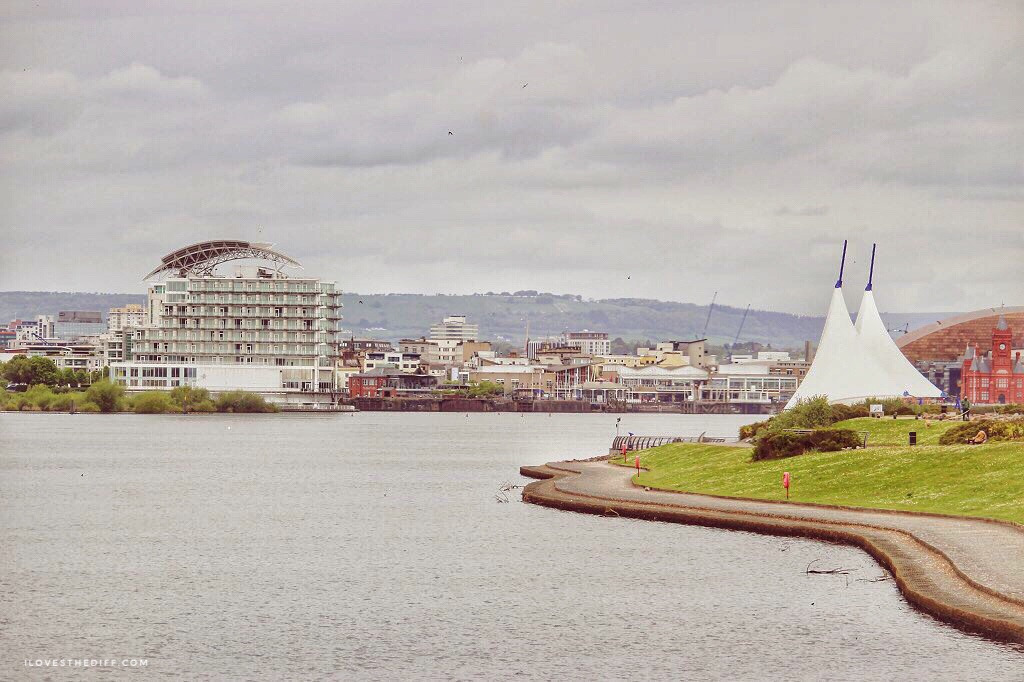 Birding books have been casually left on the tables and the RSPB logo is in view at all times, but in spite of this, so far it seems the plan is to not shove an educational message down people’s throats.

Personally, I reckon they’ll be missing a trick if they don’t do more to inspire and educate receptive visitors, especially younger ones. It is of course early days. Given the amount of empty wall space, I’m sure they will do more in due course, especially when the swift tower is erected on the Barrage at the end of June.

Something people should be shoving down their own throats is the cake. We requested a slice of the walnut espresso. A “good choice” said catering manager Foxy, and he wasn’t wrong. It was delicious. And better still, we didn’t receive a slice – it was a huge chunk. It could have sunk a lifeboat. If we’d walked from the Bay to the cafe rather than the nearby car park we might have felt it had been deserved too.

In addition to cake, there’s an array of sarnies and salads, as well as croque monsieur (£4.50), a chicken, spinach and coconut milk curry with rice for just £6.75, and various breakfast options, including eggs Benedict.

Foxy, or Neil Fox, of the eponymously named Penarth delicatessen is running the place for the RSPB, while his wife continues to run Foxy’s. Contrary to Penarth Daily News, Foxy hasn’t bought the place. He has, however, brought his suppliers with him so it seems RSPB Cymru have got pretty lucky in employing him.

You might not get a smile out of Foxy – “it’s not in my nature” he said when posing for this photo, but he didn’t so much as grumble when we ordered another coffee three minutes before closing or stayed for a good 20 minutes after the doors were locked. (By the way, I’m referring to him as Foxy because it says Foxy on his name tag, as you probably can’t see from this photo, so presumably he likes it.)

What else might you need to know? Oh yes, the cafe currently closes at 5pm (it’s open from 9am). There are plans afoot to obtain a license for alcohol and live music, as well as to provide all important outdoor seating in due course. And yes, our canine friends are allowed in. “We even let dogs in for a brew and a flapjack if they’re keen,” says Carolyn Robertson, project manager at RSPB Cymru.

“It’s been a wee while coming so we’re super excited to have officially turned the frothy coffee machine on,” Carolyn told I Loves The ‘Diff. “For us this is a great new adventure. We spend over 250 days a year engaging children and families with nature in Cardiff. Through our events and activities across the city over 30,000 children have been able to spend more time with nature. Café Hafren is a bit different. It’s got the cake factor for a start and a view (with a brew) that includes lots of brilliant birds, from screaming swifts in the summer to grebes and roosting gulls in the winter.”

It’s nice to know that some of the £2.50 you spend on a latte (or on anything for that matter, I was just using that as an example) will go to improving the locality for bird life, which is abundant in Cardiff Bay.

As we strolled along the barrage in the early evening, swifts darted and played overhead. I doubt we’d have identified or appreciated them had we not stopped in Cafe Hafren.

A word of warning to cyclists: when we visited (on Wednesday 9 May) a member of staff had just had her bike nicked from outside, so it’s worth remembering that thieving gits operate out by yer too. Sorry to add this bit of negativity but it’s definitely the kind of spot that folks might be tempted to not lock a bike if popping into the cafe for just a minute.

Visit our official site ilovesthediff.com if you fancy it. Ta very much for reading.

View all posts by ilovesthediff